Last week, Thura and I reorganised my bookshelves. The book collection in my one-room-appartment had got a bit out of hand and Thura is, after all, the daughter of a librarian. As a result, after some hours of work and a bottle of port, all my books are now sorted by genre, use and origin. Placed quite appropriately next to the cookbooks, there’s a small section I am very proud of, exclusively devoted to Christmas books. One of the books you’ll find there is Crime at Christmas, which according to its cover is a ‘classic festive mystery’.

Set in a big city house in Hampstead at Christmas time, with an array of family members, house guests and domestic staff, the story reads like a game of Cluedo. Malcolm Warren is the narrator of the story: a stockbroker, who was invited to the house of one of his clients to celebrate Christmas with the family. He is a stuck-up and whiny man, who sprains his wrist in the first chapter during a game of musical chairs. “To my great relief I found that I could walk without any difficulty. Evidently I still had legs, if not arms, ” he tells us, before he retires to bed to recover. He keeps this dramaqueen attitude throughout the book, taking to bed every time a dead body turns up. He ought to know that while in the midst of a murder mystery, nobody has time for your complaints about a ruined Christmas or bruised arm.

In the first two chapters, the many characters who stay at the house are introduced. These people will, later on, all either be under suspicion or become victims themselves. They are, besides Warren and probably some anonymous other staff, the following people:
Mr Quisberg is the owner of the house, a rich businessman with a foreign accent, although Warren can’t quite guess what country he comes from. He is the third husband of Mrs Quisberg, who has five children from her two previous marriages, one of whom spends Christmas in Switzerland with his cousins. The other four stay at Beresford Lodge for the holidays. They are Clarence James, a somewhat sulky painter and poet; Amabel Thurston, a pretty blonde socialite who is engaged to a loud and somewhat rude man called Leonard Dixon; Sheila Thurston, who has just finished school; and Cyril, who is only twelve years old and recovering from an operation. He is tended to by the beautiful, dark Nurse Moon and regularly visited by the house doctor: McKenzie. Staff members Warren meets are Edwins, the footman and Mr George, the butler. The other house guests are Harley, who is Mr Quisberg’s secretary, Harley’s elderly mother and finally Mr Quisberg’s best friend: Dr Martin Green. The doctor is a big and eccentric man, whom some people call a genius. Warren takes an instant liking to him, but like all the other characters, he seems to be involved in some sort of secret business.

At dawn on Christmas morning, a body is discovered on one of the balconies, and Warren gloomily guesses that this will mean the end of the festivities and his comfortable holiday as a pitied ‘invalid’ in Beresford Lodge. He now has to be nice to the shocked members of the family and he is no longer the centre of attention. He isn’t really interested in finding out what happened, although he fancies himself a bit of an investigator, but he is bored and so he observes and asks questions. As an unobstrusive, mildly unpleasant person and by sheer luck, he manages to overhear quite a lot of things. He tells the readers about his own selfish thoughts and feelings as well, which makes him such an irritating character that the story becomes quite funny in my opinion. I can, however, imagine how people could be impatient with this story, waiting for the detecting to begin. Luckily, a second death occurs, and this time Warren is sparked into action by fear of being implicated in what is, this time, clearly a murder and not an accident. Clues involve mysterious flute playing, secret meetings on the heath and midnight fireworks.

The book is concluded by a ‘Short Catechism’, in which Kitchin imagines questions the reader might have, and has them answered by Malcolm Warren. Kitchin uses this opportunity to have his narrator explain why he deems detective stories worth telling: because they present a nice puzzle, and because they are studies of ordinary life by way of the contrast with something terrible. Warren uses a lot of words to explain it and seems rather proud of his thoughts. From this strange piece of meta-story I got the idea that Warren wasn’t just an invented character made obnoxious for comic effect, but actually quite like Kitchin himself and the obnoxious part was just accidental. I think I take back what I said in an earlier review: that writers of murder mysteries must be very interesting people. I have only read this one story by Kitchin so he might have cleverly fooled me, but I don’t think I should like to meet him. His book was fun, though!

And that is exactly how you should approach this book, I think: a fun read. If you expect a dark, gritty mystery, you will be disappointed. This is a story full of self-important characters who overreact and have not-so-deep thoughts and try to get on with their spoiled lives in the big house. We’re not talking Scandinavian psychological drama here: this book is an unashamed whodunnit. I do have to admit I was a little thrown by the ending. The mystery is resolved by the police while Warren, the narrator, isn’t quite there yet, and has to be brought up to speed by an inspector. This felt a bit sudden and I would have liked to follow Warren till he figured everything out by himself. But we can’t have everything we want, as Warren’s thwarted Christmas plans prove. He has a way of dealing with his disappointment, though, and I’ll leave his advice with you: “Apparently I was the only drinker in the room. ‘Better one than none,’ I thought, as I poured out my second glass.”

Downton Abbey Award for all those breakfasts taken in bed. 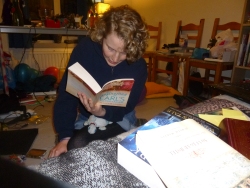