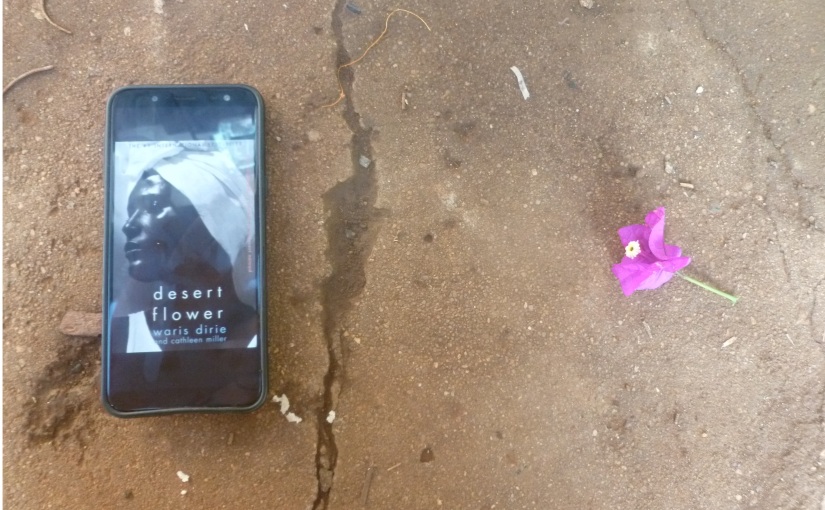 The woman in the picture is model Waris Dirie. She is a pastoralist woman from the Somali tribe from Somalia. Pastoralist means she grew up herding the camels and goats of her family moving from place to place as a nomad. Waris Dirie her youth was very typical for a pastoralist girl, including the ritual of female genital mutilation (FGM). In FGM the female sexual organs are circumcised and sewn together as a cultural practice. This book tells Dirie’s life story from her time in the desert, where she was cut, until she became an activist and ambassador for the UN to fight for women’s rights and against FGM. Female empowerment is the main theme of the book and throughout Waris Dirie’s life. I must warn you that the FGM ritual is described with a lot of graphic details. This biography is written by Cathleen Miller, who is a professional non-fiction writer of stories with political meaning.

The story starts in the desert where Dirie and her family scrape out a livelihood with their livestock. Despite the hardships, it is described as a happy youth. The only thing that disturbs that is when she is circumcised. But to her it is a normal practice, so when she is healed life continues as before, although there are added health challenges caused by the circumcision such as an extreme painful menstruation. That is, until her father decides to marry her to an old man. Waris Dirie flees from her family and  runs through the desert. She ends up in Mogadishu, the capital city of Somalia. There she lives with her sister until she gets the offer to become a house servant in London for a wealthy uncle on a diplomatic mission. In London, she becomes a model who travels all over the world. Through an interview in a magazine where she opens up about FGM, she becomes an activist and UN ambassador. There are many more things happening in her life between arriving in London and becoming a model, but for that, you have to read the book.

The book talks about the many challenges Waris Dirie faced in her life from illiteracy, poverty, the threat of deportation, exile and racism. But the toughest challenge was dealing with the reality and repercussions of FGM. FGM is an extremely painful ritual which can lead to death and other health complications during the procedure and in the rest of the girls’ lives. In Waris Dirie’s case, her sexual organs were sown together to only leave a small hole to pee or menstruate. This makes menstruation painful and makes sex and pregnancies a risk. I mention the graphic details on purpose because that is how it is written down in this book. I think it is written like that because Waris Dirie wants people to know the truth of what happens, and not a watered-down version people can wave away as ‘not that bad’.

Waris Dirie decides to become an activist to prevent other girls from undergoing the same ritual. Also, she wants to break the silence around the subject. When Dirie first arrived in London she did not know that what happened to her is not normal. She finds out because of how easy other girls have when they pee. However, she doesn’t dare to talk about it or to ask questions to her friends or the doctor. For her, and many women like her there is a big taboo to talk about their sexual organs, also in front of a doctor. I read somewhere that this book helped to start outlawing FGM. I can understand that because the book talks about it openly, including parts of the issues which are not immediately apparent, such as the stigma and fear of women to admit what happened to them. Waris Dirie finds the courage to go to a doctor to find out what happened to her and to see what can be done to make her life easier. There are surgeries available to help with this. My hope is that other women will find the courage to do the same when they read this book.

Looking at all Waris Dirie’s achievements, you can say that she managed to build a successful life away from the culture and habits of her youth. However, there is also a sense of sadness and nostalgia in her story. She misses nomadic life and her country and family and there are certain Western habits she could never get used to. Things like exact timekeeping with a watch and accumulating a lot of possessions. She grew up relying on the position of the sun in the sky to know the time and to be able to travel light. At some point, she is exiled from Somalia because of immigration issues, and the thought of never seeing her mother again brings her to a very low point. It is clear that Waris Dirie loves the culture and country she comes from, even though she dedicated her life to fighting certain parts of that culture. It is an important point to note in stories about activism and discussions of changing certain cultural practices that we don’t compare one country or culture with others in terms of good and bad, with a conclusion that one culture should make room for another one. It is more important to discuss the good and bad of cultural practices and judge them depending on that. This book does a very good job with that because Waris Dirie talks about her likes and dislikes of Western culture and her time as a pastoralist woman openly and honestly.

The last thing I want to discuss is the writing style of the book because it felt strange to me. It reads as if the story was not completely edited before the book was published. I read the Dutch translation of the book though, so I don’t know what the original English is like. However, there were a lot of short sentences and half descriptions. For example, Waris Dirie talks about her ex-husband who stalks her and even follows her to New York. But she doesn’t go into detail. That makes it sound like it was no big deal to her and that events in her life follow on each other without having much impact on herself. However, that can’t be true. Everything that happens to us shapes us in one way or another. So, this is probably because of the way the story is edited or translated, keeping to the facts and leaving interpretations to the reader.

At the core of this book is the story of female empowerment. Waris Dirie is determined to live her life the way she wants and her resilience to overcome challenges is an inspiration to us all. The prevalence of FGM has gone down since Waris Dirie’s youth, but it is still happening to this day. This book contributes to showing people the truth of the FGM practice and the pain and repercussions of the practice for women. However, this book is not only that. It also talks of the resilience of a woman who underwent FGM and did not let that determine her fate. Reading the graphic scene of Waris Dirie’s circumcision left me sleepless. However, reading how she overcomes her challenges and became an activist for women inspired me to fight for women’s rights in my own way to honour Waris Dirie her legacy and those of the many other women doing similar work. One way of doing that is by sharing stories of women like Waris Dirie to empower them and to create awareness about what’s happening.

Sleepless nights award to think of ways for women empowerment so we can decide what happens to our own bodies. 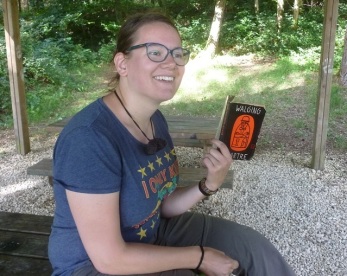 A woman teaching herself the magical art of quilting, patchwork, embroidery and other sewing-related artistry. View all posts by Bella G. Bear